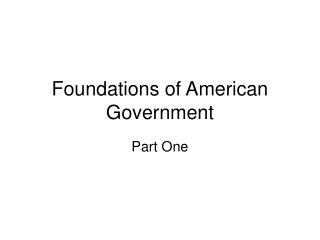 Foundations of American Government. Part One. What is Government?. It’s the institution through which a society makes and enforces its public policies. Chapter 1: Foundations: Logic and Proofs - . foundations of logic (§1.1-1.3). mathematical logic is a tool for working

PEDU 7206 Foundations of EAP - . topic 5 the systemic foundations of eap: the state and market. the context of eap: