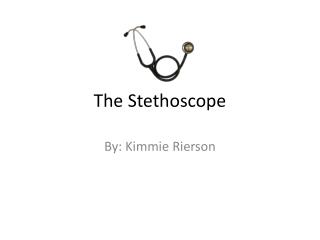 PRECORDIAL STETHOSCOPE - The essentials precordial stethoscope first advocated in the late 1940s. by the 70s was

On the Other Side of the Stethoscope: Mental Health on the Physician Developmental Continuum - . andreea l. seritan ,

This demonstrates the location of the cuff and placement of the stethoscope for taking blood pressure - . be able to

Why must the doctor use a stethoscope to detect my heart beats? - . my grandfather had a heart attack yesterday. what is

PRECORDIAL STETHOSCOPE - . the essentials. precordial stethoscope. first advocated in the late 1940s. by the 70s was

Stethoscope: - . instrument used to listen to the heart or lungs. amiable: . agreeable. jovial: . jolly. restraint. to

What Color Is Your Stethoscope? - Career Advice For The Nursing Profession - - . a web conference june 5, 2008. this

“PDAs will be as common as the stethoscope in medicine in the future.” Bob Trelease