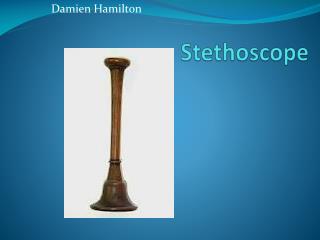 Stethoscope. Damien Hamilton. Who invented it & Why?. Rene’ laenec invented it. He invented it because he considered to be father of chest medicine. When was it invented?. It was invented in 1816.it was patented in 1851 by doctor N athan B. Marsh. What’s the purpose?. Stethoscope: - . instrument used to listen to the heart or lungs. amiable: . agreeable. jovial: . jolly. restraint. to

PRECORDIAL STETHOSCOPE - . the essentials. precordial stethoscope. first advocated in the late 1940s. by the 70s was

The Stethoscope - . by: kimmie rierson. slide 2. the stethoscope was invented by rene laennec born 17 of febuary 1781

PRECORDIAL STETHOSCOPE - The essentials precordial stethoscope first advocated in the late 1940s. by the 70s was

Best Neonatal Stethoscope - Most hospitals require nurses to have their own stethoscopes. itu2019s one of the most

How to select the right stethoscope for patient care? - Sliverline meditech, is a leading stethoscope suppliers in india