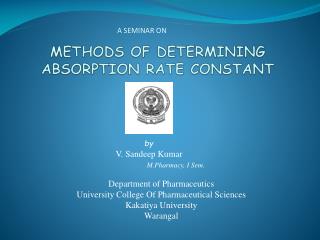 Constant Rate of Change - . lesson 1. marcus can download two songs from the internet each minute. this is shown by the

Determining the Absorption Coefficient - . it would be good to know how to determine the coefficients of the equation of

Determining Rate Law Equations - . the effect that concentration of reactants has on the rate of reaction can only be

Lesson 3.4 Constant Rate of Change (linear functions) - . introduction a rate of change is a ratio that describes how

Determining rate constants with relaxation method - . after applying a perturbation, the system ( a ↔ b) may have a new