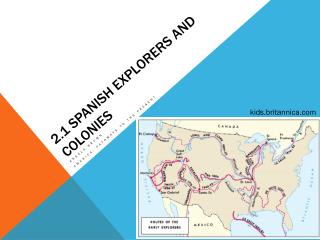 2.1 Spanish Explorers and Colonies. Angela Brown America: Pathways to the Present. kids.britannica.com. Learning Targets : I Can …. Explain how Spanish explorers built an empire in the Americas. Describe why the Spanish encouraged settlement in regions of North America.

Early American Quiz Show - . (or, what you need to know for the test.). who were the spanish explorers who conquered

Explorers - . social studies. how europeans saw the world. people only knew of three continents—europe, africa, and

Spanish Simplified! - By gail lebow (208) 853-3087 gail@spanishsimplified.com. spanish simplified!. discover how to get

Explorers of the New World - . -how europeans “discovered” the americas. european exploration and settlement.

Early Explorers and Map Skills - . sol 3.3 and 3.5. robin powell mecklenburg county. this lesson is designed to