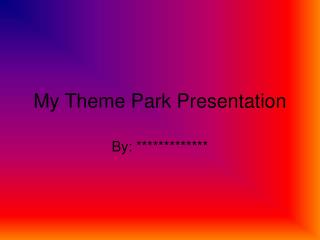 My Theme Park Presentation. By: ************* . American History Thrills of Adventure. The parts of my park include… Around the World (age of exploration) Journey to the West (Westward Expansion) As the U.S. Turns (American Revolution) Split in the Middle (Civil War)

National park in Chhattisgarh - Check out the most visited and interested national parks in chhattisgarh. it is worth

FUN AND THRILLS - . what works for me!. this is what i would use to make a decision on which is the best theme park.

Amusement Park Webquest - Name: date:. amusement park webquest. use the internet to find the items listed on each

My Favorite place to visit The Walt Disney world resort! - . the first theme park opened was the magic kingdom. it opened

Egypt Land Theme Park - . solana gutierrez. word cloud. click to see my word cloud. logos. it is a graphic that