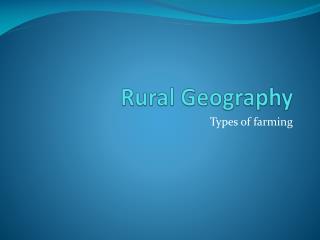 Topic V: Agriculture and Rural Land Use - . what is agriculture?. the modification of earth’s surface through the

What is Geography? - . study of the earth’s surface, climate, continents, countries, peoples, industries and resources.

Louisiana’s Geography - . unit 1. geography. something found in nature such as weather, plant life, water, and land

The Rural in the American Geographical Imagination - . cheryl morse university of vermont geography department. one and a

Population Geography - . the study of the spatial variations in the distribution, composition, migration, and growth of