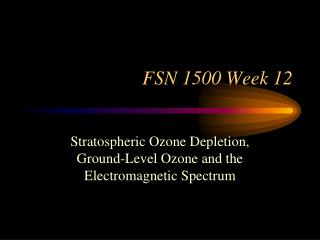 FSN 1500 Week 10 - . indoor air quality. foreword. the quality of the air we breathe is both a personal health and a

FSN 1500 Week 3 - . atoms, elements and chemical bonding: an introduction to chemistry. introduction. why is chemistry

FSN 1500 Week 1 - . the scientific method and dimensional analysis. foreword. the average person may feel overwhelmed by

FSN: Sport Science - . the physics of sports. softball vs. baseball. how much force does a 95 mph fastball generate? what

Week 12 - . what you need to know:. discovering computers: ch 15 computer careers and certification. what career

Week 12 - Database design . week 12. forms. table many records at a time some fields do not fit on one screen column and

WEEK 12 - . establishing the client/ practitioner relationship. joining and listening. now that you have all the skills

Week 12 - . crct questions. 1 . in an area where the lithosphere is being pulled apart, the crust . folds and crumples