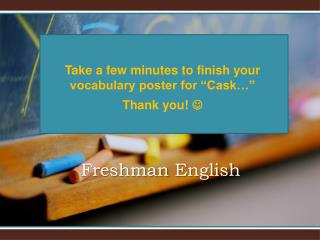 Welcome to Ms. Sonn’s 4B Sophomore English Class! 6/6/2012 - . when you enter the room, immediately copy your agenda

ENG101A: Freshman English - . lecture 2: basic logic and making inferences. learning objectives:. what is logic? what is

ENG101B: freshman English - . lesson 4. objectives:. today, you’ll learn how to: start an essay (or term paper) with a

Freshman Information - . class of 2018. welcome. empowering all students to succeed in a changing society the relentless