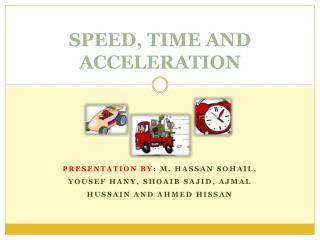 SPEED, TIME AND ACCELERATION. Presentation by : M. Hassan Sohail, Yousef hany, Shoaib Sajid, Ajmal Hussain and Ahmed Hissan. Lesson Objectives. To understand what is speed? To know what are the instruments used to calculate speed? To use the formula speed=distance/time?. “SPEED”.

DYNAMIC SPEED GOVERNORS - . seminartopics.info. introduction. with the of aim of dynamically limiting the speed of the

1. Motion of an object is described by its position , - Speed , direction , and acceleration. 2) mks units are m eters,

Constant Speed &amp; Acceleration - . inertial reference frame. defined as the perspective from which a system is

TAKS Objective 5 - . the student will demonstrate an understanding of motion, forces, and energy. practice filling in.

Centripetal Acceleration – acceleration towards the center of a circle. - Circular motion and gravitation. centripetal