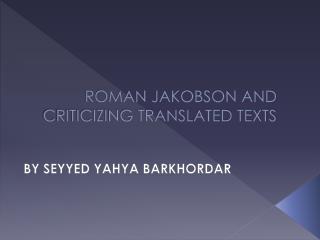 Texts, Dialogue and Contexts - . dialogic nature of language/texts: orders given to the twelve (1523) #8 the lords and

Poe Texts Nonfiction Texts and Organizational Patterns - . read to identify and understand how and why texts are

Informative and Explanatory Texts - . words of the week. definition. informative text . . . informs the reader about the

Criticizing People without Repercussion - . ms. logan english i. critique. a paper on several detailed aspects of a work

International Texts and Contexts - . week 5 – short fiction. ideas about borges for this week. borges provides us with

GREEK AND ROMAN - . drama. beginnings. festival to honor dionysus god of wine and fertility hope for blessing for

Translated and Paraphrased Plagiarism - . the cat and mouse game continues. one man’s rigor is another man’s mortis.

Texts and Digital Objects - . what seems to have changed. the web as universal library. generation i the ascii text

SC623 TEXTS AND DOCUMENTS - Structuralism/semiotics. there is an underlying structure made of fundamental units beneath

Roman Jakobson - . basic questions. what are the basic functions of language in communication?  what is the poetic