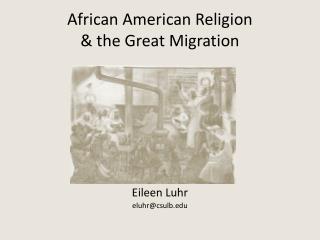 African American Soldiers in History - . can you name them all?. click on each photo on the next slide to reveal the

African-American Folk Tales - . african-american folk tales originated with peoples who were brought from africa against

The Great Migration - . the great migration. open door policy: anyone from anywhere was allowed to come to u.s.

African American Migration to Kansas - . reconstruction. why did jim crow laws harm african-americans. a) they enforced