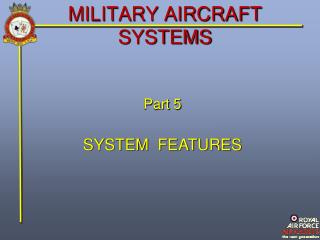 MILITARY AIRCRAFT SYSTEMS. Part 5 SYSTEM FEATURES. Military Aircraft Systems. Safety Features. The safety features of air-launched weapons are designed to protect the aircraft and ground-crew, and to ensure that the weapon is armed and released only when required. Small Unmanned Aircraft Systems - . alea activities and the iacp guidelines for the use of small unmanned aircraft