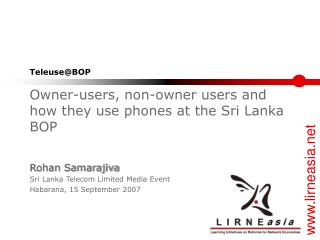 Teleuse@BOP. Owner-users, non-owner users and how they use phones at the Sri Lanka BOP. Rohan Samarajiva Sri Lanka Telecom Limited Media Event Habarana, 15 September 2007. www.lirneasia.net. Bottom of the Pyramid. Emerging markets are ‘where the action is’ The next billion... Bop - . by kathryn park. the bop is a form of poetic argument consisting of three stanzas, each stanza followed by a

The Bop - . it’s almost the blues. the bop history. a recent invention, the bop was created by  afaa michael weaver

Solution to BOP: - Prentice hall lesson 11.1 how do you simplify a radical expression? what is the multiplication

8. The Bop - . jamie shin. who made it?. ‘the bop’ was made by afaa michael weaver during a summer retreat of the

Teleuse by the Bangladeshi migrant worker - . this work was carried out with the aid of a grant from the international

Balance of Payment (BOP) - . balance of payment. the bop of a country can be defined as a statement of all economic