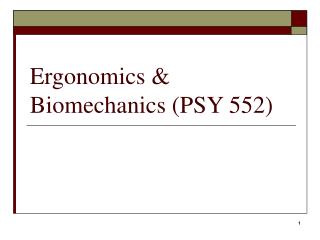 Chapter 6: Biomechanical Foundations of Physical Education and Sport - . what is the value of biomechanics for physical

Laboratory Ergonomics - If you have questions about this training series or any occupational health &amp; safety

Introduction to Ergonomics - . if you have questions about this e-book or any occupational health &amp; safety issue,

Patient Care Ergonomics - . remember… through ergonomics job can be redesigned jobs can be improved to be within