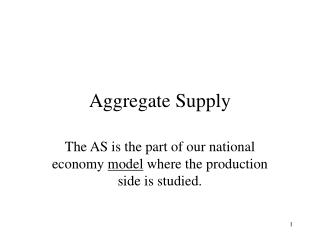 Aggregate Supply. The AS is the part of our national economy model where the production side is studied. Time Frame. Supply and Demand - . unit 1 reading: kw chapter 3,5,26. learning outcomes. students should be able to use supply and

How Do You Measure Costs Across the Supply Chain? - . gary cokins, cpim director of industry relations abc technologies,

National Income and Price Determination - . unit goals: the student will be able to. understand three keys facts about

Supply-Chain Management: A View of the Future - . leroy b. schwarz krannert school of management purdue university