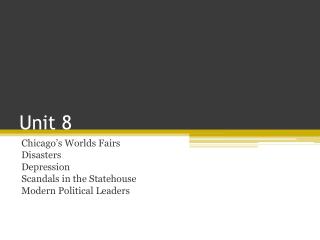 Unit 8 - . center of mass. a point that represents the average location for the total mass of a system for symmetric

Unit 8 - . how was your school trip? section a. what did she/he do yesterday ?. did some cleaning. went shopping. cooked

Unit 8: just imagine ! - . writing narrative paragraph. what do you do in your holidays? where did you go? whom did you

Unit 8: The Story of My Village - . language focus. read this sentence :. brown knows joe phones sophie, but sophie and

Unit 8 “Money” - . i. three uses of money. medium of exchange any object that is accepted for goods and services