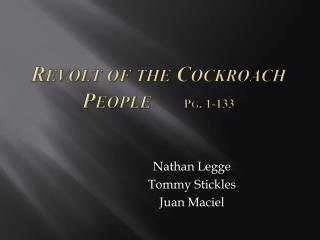 The Great Revolt of 1857 - . module. 1 policies of east india company 2 sepoys and peasants 3 the rebellion 4 aftermath.

Grammar Unit: The Appositive and Appositive Phrase - . definition: an appositive is a noun or noun phrase that renames

vanderbiltACTtalk - “from being the plaything of society it has come to dominate society. it is now our tyrant, so that

The Myth of Sisyphus - . camus’ theory of absurdity. the philosophy of the absurd . one of the main themes of camus’

Chapter 11 - . intelligence. points to ponder. think of some intelligent people. with these people in mind answer the

Can Do Careers for Deaf People - . “deaf people can do anything, except hear.” i. king jordan president gallaudet

Dementia in People With Intellectual Disability - . diana kerr centre for research on families and relationships

chemical equilibrium! - . first, a metaphor:. two floors of a store are connected by up and down escalators. floor 1 has