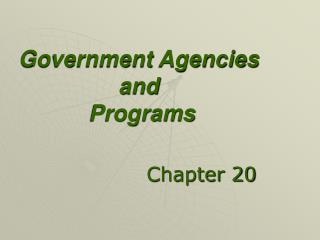 Government Agencies and Programs. Chapter 20. USDA Agencies. USDA was established in 1862 To provide assistance for farmers: Soil and water management Other facets of agriculture Many work through state or local groups Was reorganized and streamlined in 1994 Government Agencies and Departments Mailing List - Our file consists of a variety of demographic, title and industry data