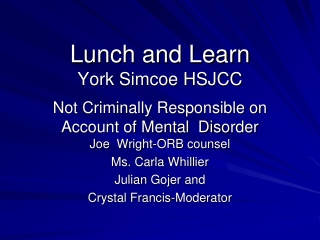 Lunch and Learn - . getting community members involved with literacy education. the educational triangle of success.

Lunch and Learn - . ecrt and effort reporting effort certification and reporting technology. as of 09/01/08 ut arlington

Learn @ Lunch - . disaster recovery coordinator – architect jack of all trades…………………master of one after

Lunch &amp; Learn - . from financial accounting and reporting. topic: journal entries. why are we having this session