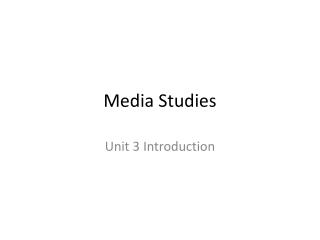 Media Studies. Unit 3 Introduction. Lesson Objective. At the end of this lesson we will have discussed the outcomes of this unit, and started looking at conventions employed in theatrical film trailers. Starter. Watch the following trailer . What do we learn about the film? Media Studies - Racism in the media. media studies. how does the media portray race?. the coon the tom the piccaninny the

Media Studies - . sixth form options evening 2011. what is it?. message  medium  listener we study how messages are

Media Studies - . review!. question 1. what was the earliest form of media we discussed ? oral. question 2. which famous

GCSE Media Studies - . task 1. key concepts- genre and media language define what a quiz show is? where it started and

A2 Media Studies - . welcome to your a2 coursework.

AS media studies - . magazine evaluation. i have created a music magazine called “bars” aimed at fans of rnb and