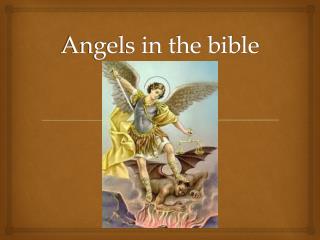 Angels in the bible Angels in the bible

Guardian Angel Prayer - Angel of god, my guardian dear, to whom god's love commits me here; watch over me throughout the

Fallen Angels - . written by: walter dean myers. attention getter. “there is only two kinds of people in vietnam.

Angelology-The Study (Doctrine) of Angels - Satan: the angel of light the bible teaches that satan is the greatest enemy

Angels - . ministers for god’s purposes and people. misconceptions about angels. angels look like people with wings

The Angels and Satan - . foundations for life. angels. what do they look like? what do they do? what are their powers? do

The Angels of God - . class 1: who are the angels?. www.livoniatapes.com. reasons to study the angels. they reveal

The Archangels - . jeff gordon and mike knee. distinction of being one of the only two angels to be mentioned in both the