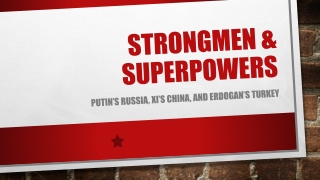 Strongmen & Superpowers. Putin’s Russia, Xi’s China, and Erdogan’s Turkey. What is a “strongman”?. : a political leader who rules by force and runs an authoritarian regime Authoritarian: a government that favors complete obedience to authority as opposed to individual freedom Detente - . from the french se detendre…. to relax. what is it? . describes a relaxing of tensions between the cold war

The cold war - . 1945-1990. the cold war declared. cold war – a state of increased tension and hostility without armed

Detente - . from the french se detendre…. to relax. what is it? . describes a relaxing of tensions between the cold war

The Cold War - . essential question. how did ww2 help lead to the start of the cold war?. introduction. at end of ww2,

Beginning of the Cold War - . containment and beyond. what is a/the cold war?. a cold war is a state of diplomatic

Come on, Come Back - . stevie smith. think. incident in a future war?. the cold war. a nuclear arms race began after ww2

S wordman - . pascal fellner 4d. swordman. he is a superman because one day shorty killed his parents. he lived in the

THE COLD WAR - . struggle between the world’s superpowers. think about it…. what is the difference between a

Seeing UX through the Lens of Evolution : Unleash the superpowers inside of users’ mind! - . data analysis team / nexon

Origins of the Cold War - . the united states and the soviet union emerged from world war ii as the two “superpowers”

The Cold War Unfolds - . chapter 15 section 1. superpowers. after wwii, the usa and the ussr emerged as superpowers –

Proliferation beyond the “Superpowers” - . after soviet union in 1949, the first successful british test of a pure

War and Peace Chapter 5 - . how did military events and their consequences contribute to the foundations of canada.