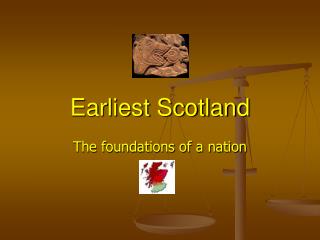 Earliest Scotland. The foundations of a nation. The word ‘Scotland’ will not be used until the Middle Ages. Before other names are attached to northern Britain: ‘Alba’, Caledonia. The first peoples of ‘Scotland’ that we know about belong to the Celtic Iron Age. Iron age Scotland

National Gallery of Scotland - The national gallery scotland is one of the finest in the world. it has a comprehensive

The Falkirk Wheel in Scotland At the beginning there were two canals: - Canal forth and clyde was built in 1777 between

Scottish Learning Festival The Early Years Collaborative and the Model for Improvement - 24 th september 2014. the

‘We want Scotland to be the best place in the world for children to grow up’ - . kay tisdall, k.tisdall@ed.ac.uk

Growing Up in Scotland: Messages from research Presentation to Fife Early Years Seminar - Joining the dots in fife 11 th

The Arrival of the Gaels in Scotland - . the beginnings of gaelic scotland. scotland around 600ad. dal riata. the gaels

GOLF - . history. it's definitely true that golf as we know it emerged in scotland. the scots were playing golf in its

Diverse Scottish Borders: - . “play your cards right”. 1. is the number of chinese people living in the borders

Callanish Standing Stones, Lewis, Scotland Earliest construction at this site dates to 3000 BC - How we know what we

A Visit to Scotland - . he who has not seen scotland, does not really know great britain. geographical position of