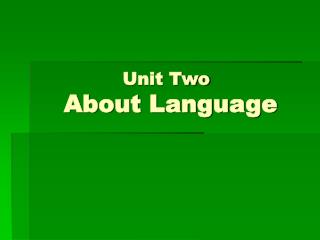 Unit Two About Language. 2.1 Theories of the origin of L. Communication constitutes one of the most fundamental needs of human beings, and is ultimately essential for their survival.

Vocabulary for Poetry Unit and Figurative Language - . sometimes words mean more than what they say… “poetry is truth

Unit Four Body Language - . discussion:. what is body language?. body language is one form of communication without using

Unit Two Text I A - . englishes. the title. do you speak english ? ---- the english language, the language used by

Unit VII: Cognition Part three-LANGUAGE - . language our spoken, written, or gestured works and the way we combine them