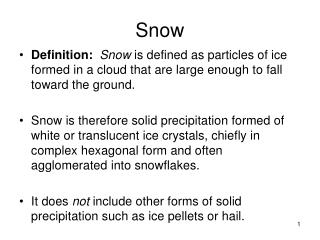 Snow. Definition: Snow is defined as particles of ice formed in a cloud that are large enough to fall toward the ground. Snow is therefore solid precipitation formed of white or translucent ice crystals, chiefly in complex hexagonal form and often agglomerated into snowflakes. Snow - Measuring the amount of snowfall is problematic, but for most cases we have the luxury of simply being concerned