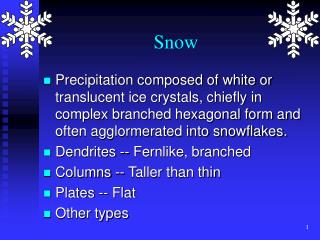 Snow - Measuring the amount of snowfall is problematic, but for most cases we have the luxury of simply being concerned

Snow - . definition: snow is defined as particles of ice formed in a cloud that are large enough to fall toward the