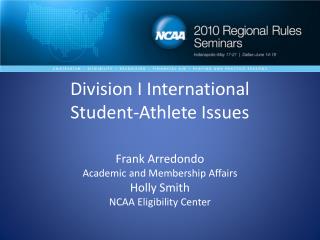 THE HEART OF THE ATHLETE - . william b baker md facc. exercise is good for you. benefits of exercise. disease prevention

OMM and the Athlete Lower Body Workshop - . jake rowan do dept of omm msucom. goals/objectives. review opp and how they

International Trademark Protection - . william fisher june 25, 2004 many of the slides in this presentation were prepared