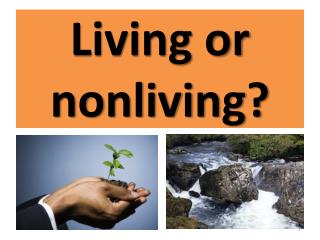 KEY CONCEPT Every ecosystem includes both living and nonliving factors.

Let s Practice Tell if the object is living or nonliving.

Ecology &amp; Conservation - . a guide to chapter 26. living things and their environment. environment: all living

ECOSYSTEMS - . what is an ecosystem?. an ecosystem is made up of all the living and nonliving things in a particular

Living or Non-Living 9/21/12 - . objective: i will be able to describe the characteristics of life lang. obj.: i will be

Is It a Living Organism? - . the following slides show examples of living and nonliving things . based on the

Is It a Living Organism? - . take out a sheet of paper and number it 1-30. the following slides show 30 examples of

Is it Alive? - Living seed baby cow grass worm. non-living car rocks. is it alive?. what is “alive?” – living or

Virus = virion - 1. living characteristics of viruses: they reproduce at a fantastic rate, but only in living host cells.