What Does Heat Do? - PowerPoint PPT Presentation 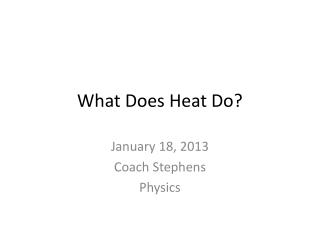 What Does Heat Do? What Does Heat Do?. January 18, 2013 Coach Stephens Physics. Calorimetry ( kal -a-rim- i -tree). I n this unit we will investigate the topic of measuring the quantity of heat that is transferred between the system and the surroundings.

What Does Heat Do?

Hewitt/Lyons/Suchocki/Yeh Conceptual Integrated Science - . chapter 6 heat. this lecture will help you understand:. the

Heat &amp; Thermodynamics - . what is the difference between heat and temperature?. both are related to energy but

Heat Transfer - . heat transfer. everything is made of molecules. when molecules gain energy they move faster and create