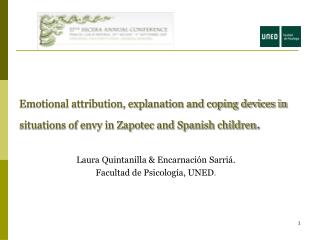 Emotional attribution, explanation and coping devices in situations of envy in Zapotec and Spanish children . Emotional attribution, explanation and coping devices in situations of envy in Zapotec and Spanish children .

noble gas envy - . ions. chemcatalyst. one atom of lithium and one atom of fluorine form a very strong bond. this is

Groups of the Periodic Table and Noble Gas Envy - . admit slip. where are the noble gases? how many valence electrons do

TIE - DYE - . tie-dye dates back to ancient times. along with beads, shells, and other ornamentation, our ancestors

Your residency: - . purpose product value. career-long fan of paul ward. my boss for a month critic golfer mover and

7 Deadly Sins - . 7 deadly sins. pride /vanity is excessive belief in one's own abilities, that interferes with the

“Roman Fever” by Edith Wharton - . using your own words, define the following:. find a partner and discuss the

Know what Spain is like before you Say I DO! - Trouwen in het buitenland, spanje is dÃ© trend, maar wat zijn de voor-