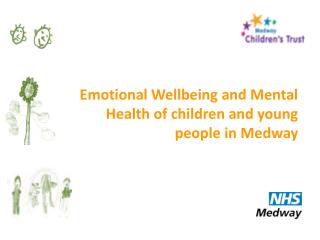 Emotional Wellbeing and Mental Health of children and young people in Medway. Medway vision for CAMHS….

SAFEGUARDING - . what is safeguarding. safeguarding is a government/nspcc initiative that helps too protect young people

Place2Be in the Inner City - . a school based mental health service association for research in infant and child

Support Children and young people’s positive behaviour - . tda 2.9. tonight we will. revisit the role of the t.a. in Mental Health - Mental health is a level of your psychological, emotional and social well-being that controls how you

Education, Health and Care plans for children and young people with - Special educational needs and disability (send) a

When you have good health, you … - . health – combination of physical, mental/emotional and social well-being. health

What is Social and Emotional Learning? - . building resilience in children and young people. teacher professional

Effects of the war in Psychosocial wellbeing of children in Gaza - . background. the gaza strip is one of the most