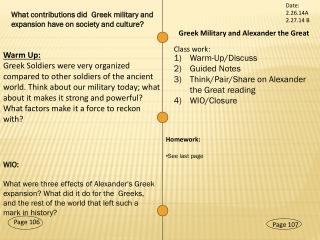 Date: 2.26.14A 2.27.14 B. What contributions did Greek military and expansion have on society and culture?. Greek Military and Alexander the Great. Class work:. Warm Up: The 17-Point Landing Page Optimization Checklist - Since the beginning to the online sale, a landing page has always been

DIBELS Next - . dynamic indicators of basic early literacy skills. dibels next. dibels next is based on new research

MARKSMANSHIP PRINCIPLES - . previous page. home page. help. next page. “ you have been trained to take your place as a

Chapter Intro-page 252 - . what you’ll learn. you will identify the basic concepts of genetics. you will examine the

Chapter Intro-page 252 - . what you’ll learn. you will identify the basic concepts of genetics. you will examine the

Assessing Google as a Teaching &amp; Research Tool - Google also caches the results of its searches. ... in essence,

Appendix 1: Table of Contents - . progress is possible page 2 the government’s obligation page 6 steps to fixing the