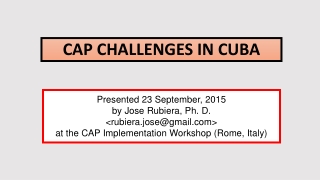 Cuba after the war Teller Amendment – Amendment to war resolution that U.S. would NOT annex Cuba…. 4 years after

Cuba - . by: javier flores and luis b iempica. cuba’s traditional food. there food is mixed with african and spanish

Castro, Cuba, and the Bay of Pigs - . why was cuba a concern for the us in the 1950’s?. cuba was closed off politically

CUBA - By: kimberly steinhart. cuba. havana. havana is the capital of capital. havana is located at the upper part of