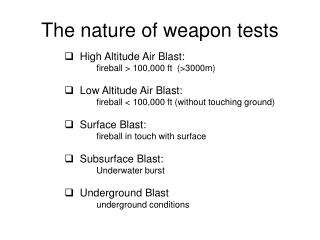 The nature of weapon tests

The nature of weapon tests

Weapons Proliferation and Global Security - . proliferation – “the rapid increase in the number and destructive

Delivery of Biological Weapons - . by mark a. prelas nuclear science and engineering institute university of

Nuclear Testing - . marshall islands example. where? when? why? answer the where, when, and why on your own first, then i

Path to a World Without Nuclear Weapons - . presentation by h.e. mr. libran n. cabactulan permanent representative of the

Introduction to Classical and Modern Test Theory - . highlights of history of psychological testing and assessment.