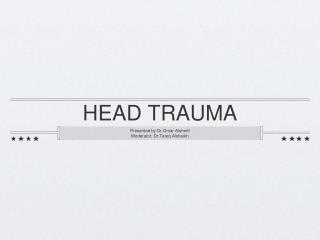 HEAD TRAUMA. Presented by Dr.Omar Alsherif Moderator: Dr.Tareq Alshaikh. epidemiology. Each year more than 1.4 million patient sustain head trauma in the US ➞ 1.1 million present to ER ➞ 235’000 hospital admissions TBI is the most common cause of death in people < 45 yrs HEAD INJURY AND INTRACRANIAL HYPERTENSION - . head injury. major cause of morbidity and mortality in children leading

Head Injury - . head injury. any trauma to the scalp , skull , or brain head trauma includes an alteration in

Trauma - . mark haupt. what is trauma?. response to an event that shatters your world trauma: a deeply distressing or

Skull X-ray in trauma To do or not to do? - . dr pauline louw. “no head injury is so serious that it should be

SYB 2 - . marni scheiner ms iv. what kind of image is this, and what do you see?. subdural hematoma. typically following

Trauma “This ain’t ER” - . ben zarzaur, md unc department of surgery section of trauma and critical care. what is

Trauma: - What it is - Why it matters to you - . prepared by the trauma-informed care initiative of western new york.