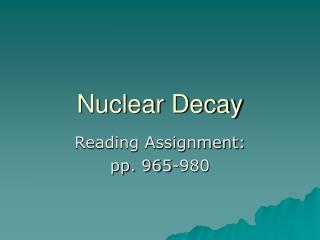 Nuclear Decay. Reading Assignment: pp. 965-980. Particles can be identified based on how they interact with a magnetic field: Alpha particles will curve slightly Beta particles will be deflected significantly, and in the opposite direction from alpha

Nuclear Decay - . chemical reactions all involve the exchange or sharing of electrons, they never have an influence on

Nuclear Reactions &amp; Decay - . cps chemistry ch.22. nuclear binding energy. a nucleus is stable if it has a

1.3 Nuclear Decay and Radiation - . knowledge of subatomic particles has led to many advancements- unfortunately besides

Nuclear Decay Revisited - . enter the probability to decay in a time unit – approximately 0.083 for iodine 131 to decay

Ch 9 Nuclear Decay - . review from ch 4… atomic number (z) tells you number of protons always the same for an element;

Nuclear Decay - . come together, fall apart. before we begin…. what is half-life? what is the difference between

Nuclear Chemistry – Radioactive Decay - . the discovery of radiation. in 1896 henri becquerel made an important