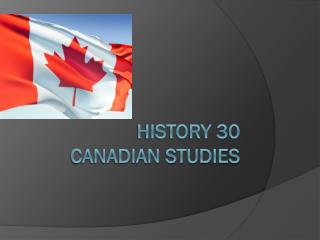 History 30 Canadian Studies. Unit One Change. Society. Society- A system where individuals and social organizations performing a variety of roles interrelate with each other according to a set of mutual expectations and in ways controlled by the social and natural environment. Canadian History - . in the beginning…. 1534 jaques cartier explored the st. lawrence river searching for a passage

Some Canadian History - . in two parts. p engineering education - the beginnings p the millennium project. the origins of

Canadian History XI - Geography in europe and the causes of wwii. canadian history xi. geography. recap of wwi and the