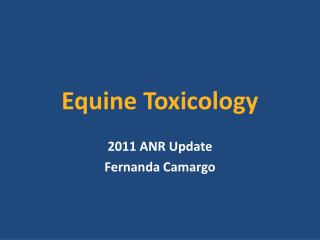 Equine Toxicology. 2011 ANR Update Fernanda Camargo. What is TOXICOLOGY? . TOXICOLOGY is the science of Poisons A POISON is any solid, liquid, or gas that interferes with life processes. TOXIN: a poison that originates from biological processes.

Chapter 15: Environmental Health, Pollution and Toxicology - . disease. disease is often due to an imbalance resulting

Chapter 9 FORENSIC TOXICOLOGY - . introduction. toxicologists are charged with the responsibility for detecting and

Health Effects of Hazardous Materials - . toxicology. the study of poison &amp; substances that cause harmful effects