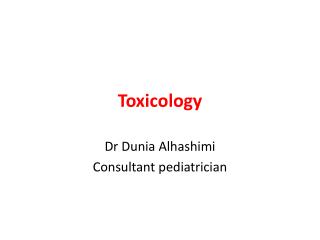 Toxicology - . antidepressants and pesticides (illustrated by the book of bunny

TOXICOLOGY - . for english speaking students. definition. the study about the nature and mechanisms of chemicals´

Toxicology - . deals with long-term effects of foreign chemicals on the body. chemicals affect the body with doses

Toxicology - . management of the poisoned patient. background. dsp is a big problem intentional self harm or suicide, was

TOXICOLOGY - Occupational toxicology. attempt to define levels of chemical that are safe and do not produce adverse

Toxicology - . what is toxicology ? the study of the effects of poisons. poisonous substances are produced by plants,

Toxicology - . the respiratory system. direct target of toxicity from exposure to many airborne chemicals. provides an