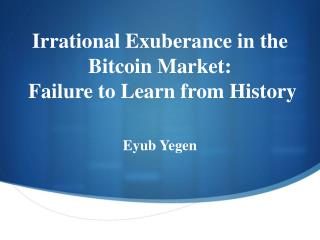 Irrational Exuberance in the Bitcoin Market: Failure to Learn from History Irrational Exuberance in the Bitcoin Market: Failure to Learn from History. Eyub Yegen. The Role of Information in Economics and Finance. Guidance to make effective and efficient decisions. Achieve the optimal level of benefit. Rational Behavior ( Marschak , 1950).

Irrational Exuberance in the Bitcoin Market: Failure to Learn from History

More Swing - . chapter 14. objectives. learn to add menus, icons, borders, and scroll bars to guis learn to use the

Therapy Chapter 14 - . history of insane treatment. maltreatment of the insane throughout the ages was the result of

decompensated heart failure: lessons learned from the adhere regisry - Why focus on acute heart failure?. despite

Ch.7 Price-Taking Market - What is a market? market( 市場) is a system governed by a set of rules or customs( 習俗)