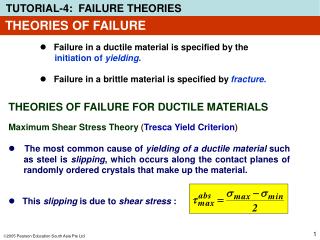 Failure Theories – Static Loads - Failure – a part is permanently distorted and will not function properly. a part

Failure Theories – Static Loads - Failure – a part is permanently distorted and will not function properly. a part

Chapter 6 Fatigue Failure Theories - . fatigue failure. occurs when stresses are changing throughout the life of a part.

Theories of Learning: Constructivist Theories - . dr. k. a. korb university of jos 19 may 2009. outline. overview of

Theories of Nature and The Nature of Theories - . matthew strassler, university of washington based on: lectures given at

Theories of Personality - . saad almoshawah ph.d health psychology. theories of personality. everyone is different, yet

Theories of Evolution - . type i cheetahs can reach top speeds of up to 60 mph; however, they were not always this

Theories of Evolution - . early beliefs…. dating back as far as aristotle (384-322 bce), it was believed that all

Theories of Emotion - . ap psych. theories. how do biology, cognition, and behavior interact to produce emotion? is one