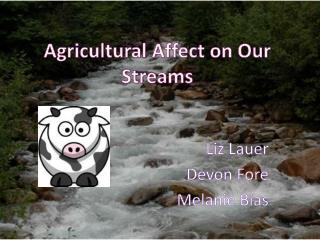 Agricultural Affect on Our Streams

Agricultural Affect on Our Streams . Liz Lauer Devon Fore Melanie Bias. What is agriculture?. Agriculture is the practice of cultivating the land and raising live stock, both of which affect the watershed. . What is watershed?.

Agricultural Affect on Our Streams

Lecture 1. Introduction to A gricultural P ollution C ontrol - . including particular reference to eastern and central

Streams and Rivers - . streams and rivers definitions. tributary: a stream that runs into another stream or river river

WATER DEGRADATION - Surface and ground water pollution. water degradation. at the end of this presentation, students will

Natural Resources, the Environment and Agriculture - . chapter 10. topics of discussion. agriculture and the environment

Human Impact - . how we affect the lithosphere. essential standards. een.2.2 understand how human influences impact the

Does Raising Taxes on the 1% Affect Job Growth? - Macro final