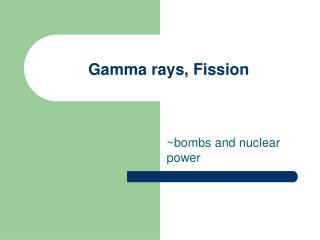 Gamma Rays - Where do gamma rays come from?. black holes may be a source of mysterious gamma rays in our universe.the

Gamma Rays - . by miles, raj, and tony. statistics. wavelength is between 10 and 1 pm (picometers) frequency is between

「 Cosmic-rays and diffused gamma-rays 」 - Is the diffused γ-ray data in harmony with the cosmic-ray data ?. 「

What are gamma rays? - Gamma rays have wavelengths between 0.001 and 0.1 nm (less than the size of an atom), which makes

Techniques for detecting X-rays and gamma-rays - Pair production. creation of elementary particle and its antiparticle