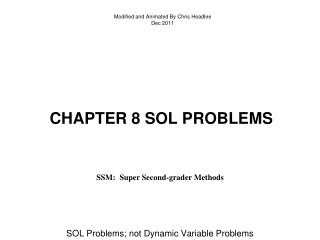 Chapter 8 Problems - . describe the differences between first, second, and third normal forms. give an example of a

SOL 8 - . developed vs. developing countries. what are the differences between developing and developed nations???. 1.

Problems from Chapter 8 - . galileo and the papal inquisition. describe strategies in the subgame perfect equilibrium.

SOL Quiz 8 - . china. 1. in order to show respect to the emperor a person performed a series of three low bows, with the

SOL Quiz 8 - . american revolution iii. 1. the phrase &quot;not worth a continental&quot; referred to a. the