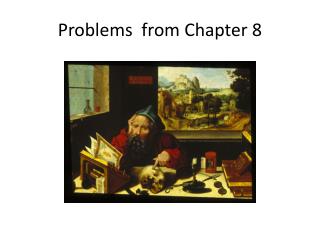 Problems from Chapter 8. Galileo and the Papal Inquisition. Describe strategies in the subgame perfect equilibrium. What does pope do? What does Galileo do at each of his decision nodes? What does the inquisitor do?. Strategic Form. Three Players.—What are the strategies? . CHAPTER 8 - . bond valuation and risk. chapter 8 overview. this chapter will: a. explain how debt securities are priced

Chapter 8: Agreement - . number agreement of subject and verb problems in agreement phrases and clauses between subjects