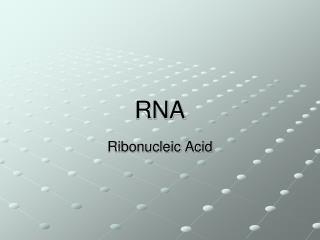 RNA. Ribonucleic Acid. Question. Use the following diagram to locate the nucleus and ribosomes on the cell. Key Terms. Ribose : sugar molecule of every RNA nucleotide Transcription : process by which genetic information is copied from DNA to RNA. The structure of RNA.

RNA - . 12.3. what is rna?. macromolecule made of nucleotides from dna used to build proteins 3 types total. rna is

RNA - . and the business of making proteins. rna structure. rna is the principle molecule that carries out the

RNA - . cs 466 saurabh sinha. rna. rna is similar to dna chemically. it is usually only a single strand. t(hyamine) is

RNA - . yusron sugiarto, stp, mp, msc. central dogma of molecular biology. the flow of information in the cell starts at

RNA - . the “other” nucleic acid. dna is king! absolute monarch! but, a king that is trapped within the castle –

RNA - . review of dna. dna is a double helix that is a code for something what? structure/shape explains how it is