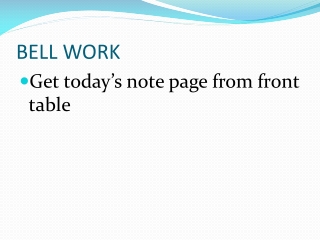 BELL WORK . Get today’s note page from front table. BELL WORK . Get out the notes packet over mitosis vs meiosis. MITOSIS VS. MEIOSIS. Mrs. Stewart Biology I Stewarts Creek High School. Objectives:. Differentiate between the process of mitosis and meiosis