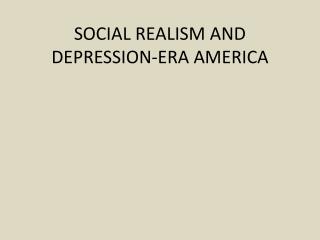 SOCIAL REALISM AND DEPRESSION-ERA AMERICA. American theatre and society in the 1920s. The post-World War I context The Freudian bent of American drama in the 1920s: The Influence of Culture on the Development and Detection of Postpartum Depression - . cindy-lee dennis, rn, phd

The Great Depression and New Deal - . essential questions. what underlying issues and conditions led to the great

Chapter 18 - . the triumph of the bourgeoisie 1830-1871. the working class. new class left behind by industrialization