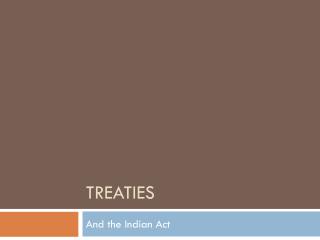 Mi’kmaq Treaties - . information from http://mrc.uccb.ns.ca/treaties.html. the treaties. around the room there are five

Teaching About Treaties - . networking meeting november 2011. why teach students about

The Peace Treaties - . flawed peace or the best possible at the time?. problems. how to: establish stable international

The Peace Treaties - . aim: to revise the paris pace conference. the big three. the fourteen points. wilson wanted a